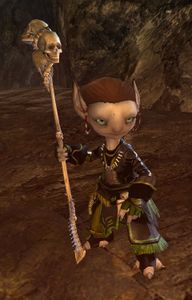 You've come far and accomplished much, only to die and be reborn as my undead slaves!

Necromancer Rissa was an asura necromancer that somehow became corrupted by the Elder Dragon Zhaitan, even though she appears to still be among the living. She had taken a Dragon Crystal and broke fragments off of it, making amulets out of the fragments which she then spread across Tyria. Howl the Brazen was given one such amulet that twisted him into a Risen upon death.