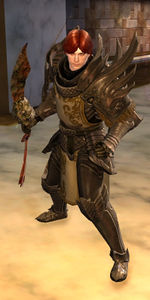 I need her blood! Royal blood. Don't you understand? It can cure the corruption. Make us all free!

Corporal Kellach was a soldier in the Seraph guard. Being greatly devoted to Kryta, he sought a power that would allow him to safeguard Queen Jennah and his home. To do this, he sought the aid of a seer, Alastia Crow. She led Kellach to an old artifact from the Ruins of Orr which contained Zhaitan's influence and power. This power slowly corrupted Kellach, turning him insane and a beacon for the Risen to follow.

Kellach returned to Alastia for revenge and for a cure; to save her crew on the Ravenous and in revenge, she told Kellach a lie that to cure his "corruption" he must bathe in royal blood. In fury, Kellach killed Alastia Crow and headed towards the Royal Palace in 1325 AE, entering the Queen's Throne Room through a secret passage near the Northern Waterways that led to the palace cellars. Queen Jennah attempted to reason with Kellach, but he was driven too far in insanity and attacked her.

Section-stub. This key section of the article is incomplete. You can help the Guild Wars 2 Wiki by expanding it.
Reason: May be missing additional skills