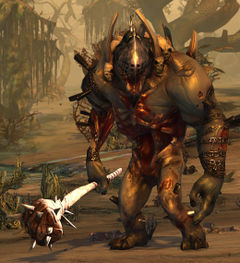 Risen Abominations are Risen minions of Zhaitan that are sewn together from multiple corpses.

Aid the wardens of Shadowheart (22)

Help the Priory's excavation of the ruins (57)

Help Potatlan at the Western Shore (57)

Help Caer Evermore defeat the Risen in the region (58)

Help Pixtor test his weapons on the Risen in Murkvale (65)

Defend the sylvari tower from the Risen (5)

Defend settlers from the Risen horde (8)

Defend Donala and keep undead from overrunning the oasis (55)

Clear undead from the oasis (55)

Escort a new Vigil weapon to Nonmoa Lake for testing (59)

Protect the Pact Siege Team as it sets up trebuchets (71)

Defend the beacon until Pact reinforcements can arrive (80)

Protect the technicians as they rebuild Penitent Camp (80)