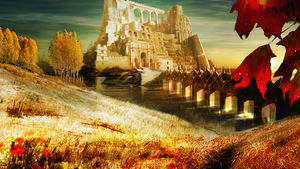 Once, Ascalon was a beautiful, fertile land of rolling green countryside and magnificent cities.

The Kingdom of Ascalon, alternatively called the Republic of Ascalon,[1] was a human sovereign state in Ascalon from 100 BE, when its first king was crowned, until 1090 AE, when it was all but destroyed by the Foefire.

Today, all that remains of Ascalon is a rump state consisting of a single duchy. It is led by Duke Wade of Ebonhawke, although Queen Jennah of Kryta also styles herself "Regent of Ascalon".

The Great Northern Wall, as it stands today.

Ascalon was a successor state of a Kingdom of Tyria,[2] which encompassed the territories of Ascalon, Kryta, and Orr (which was first settled by humans in 205 BE) and was ruled from Orr by King Doric—"the first of all sons of Ascalon"[1] (and all kings of Ascalon, like the other Tyrian human kingdoms, were descendants of Doric). The first king of Ascalon was crowned more than 100 years prior to 1 AE,[1] and the high-plains settlements that would become the nation first became known as Ascalon in 100 BE,[3] a year in which the new king received the kingdom's first Canthan ambassador.[4] This was also the year that the humans drove the charr out of the region,[5] sparking a conflict that would define the kingdom and eventually consume it.

In 898 AE,[3][5] the Great Northern Wall was erected to drive the charr back for good. Eventually, their success was great enough that they felt comfortable building settlements north of the wall, and several of the great cities of Ascalon could be found in these northlands. Ruins bearing a strong resemblance to Ascalonian architecture can even be as found as far north as the Grothmar Valley, at the Ooze Pit and Cathedral of Flames Gate.

Ascalon was a participant in all three of the Guild Wars. In the final years of the last Guild War, the people of Rin looked to a soldier named Adelbern, a simple man of humble origins (although presumably still a descendant of King Doric), who rallied the people with his courage and cunning and steeled them not only against the guilds of Orr and Kryta but also against the terrors of the charr. After the assassination of the Ascalonian royal family,[6] rather than passing to the heir apparent Prince Barradin, the crown passed to Adelbern, who was elected king by the people of Ascalon.[7]

Ascalon was the ancestral seat of the charr and a primary focus of the charr military force. The humans took shelter behind the Great Northern Wall as a barrier against their foes, but the charr shamans of the Flame Legion had powerful magics at their disposal. In 1070 AE, using the Cauldron of Cataclysm and the power of the titans (powerful spirits worshipped as gods), the shaman Jaw Smokeskin unleashed a devastation known as the Searing. Burning crystals of flame fell from the skies, igniting all that they came in contact with. The spell was as powerful as a natural calamity; it changed the very land itself, creating craters and fissures in the ground and even making the rivers flow with tar and lava. Countless lives were lost.

In the Ascalon capital city of Rin, the royal family tried to give strength and resolve to the people. However, there was a deep divide over how this should be accomplished. While King Adelbern believed that the humans should concentrate on rebuilding the city, his son, Prince Rurik, vehemently disagreed, feeling that the humans should strike back at the charr and take the offensive.

In 1072 AE, against his father's wishes, Rurik led a small force to the remnants of the Great Northern Wall. There he witnessed the sheer numbers of charr amassed to take the human lands. It was obvious to Rurik the wall would soon fall; he then ordered a retreat of the human defenders. Before he left, however, Rurik found an unexpected artifact during a rescue mission: the mouthpiece of the legendary warhorn Stormcaller. He then undertook a quest to restore Stormcaller, convinced it was the only thing to save his people. This quest was ultimately successful.

With Stormcaller complete, Rurik attempted to return to the capital, but his arrival found the city in flames. The charr legions were successful; they were in the process of burning and razing the city. Prince Rurik let loose the magic of Stormcaller. At the sounding of the horn, the skies clouded over. Soon, a gentle rain pattered forth. The fires of the burning city were put out, and the remaining citizens were able to flee from the charr.

With Rin fallen, the Ascalonians faced a difficult decision. The neighboring nation of Kryta had extended an offer of aid; they were willing to allow the entrance of Ascalonian refugees and provide additional support to the military effort. Prince Rurik was heavily in favor of this course; he knew what the charr were capable of and how hopeless it would be to fight the charr without this aid. However, the Guild Wars had eroded any trust between the human nations. King Adelbern refused to accept the offer. He outright forbade the Ascalonians to leave the country. Finally, after Prince Rurik vehemently argued against this, Adelbern cast him out, banishing his son (and his followers).

With nothing to stop the charr advance, the legions began to move on to the territories of Orr and Kryta.

The path of the exiled[edit]

With no hope of relief from Orr, Prince Rurik looked to Kryta. However, the journey from Ascalon to Kryta was a difficult and dangerous crossing, with the foreboding Shiverpeak Mountains between them. Rurik, now an outcast, was joined by a number of supporters; he resolved to lead them over the mountains, where they could find sanctuary.

As the group traversed the mountains, they found themselves caught in another conflict. The Shiverpeaks were the domain of the dwarves, and they themselves were embroiled in a civil war. The Deldrimor dwarves were friendly to the refugees, but the opposing faction, the dwarves of the Stone Summit, believed in the innate superiority of dwarves over all other races.

The Stone Summit made it a mission to destroy the Ascalonians as they moved through the harsh Shiverpeaks. It was only through the actions of Prince Rurik and his most trusted allies that the refugees were able to survive. It was not without cost, however; Rurik sacrificed himself at the Frost Gate, and the Ascalonians were left to face their future without the bravery of their prince. These refugees would go on to found the Ascalon Settlement in Kryta.

In 1090 AE, King Adelbern's reign had come to an end. Faced with the destruction of his line, the defeat of his people, and the fall of Ascalon City, Adelbern resolved to take the charr with him in defeat. In the Last Battle of Ascalon City, Adelbern used the power held in his ancient sword, Magdaer, a relic left from the time of Arah. With his sword aloft, standing on the highest tower in the city, King Adelbern let loose a gout of flame. A white, burning heat swept the streets, immolating Ascalonian and charr alike. But only the Ascalonians arose as ghosts to continue the battle.

The spirits of the dead drove the charr from the city, forcing them to abandon the area.

However, even the Foefire could not stop the charr forever. The legion regrouped and fought their way through the spirits of the dead. The fortress of the Black Citadel now stood on the ruins of the Ascalonian capital of Rin. Outside, charr warbands held the territory from the ghosts, which they could disperse but not fully defeat. 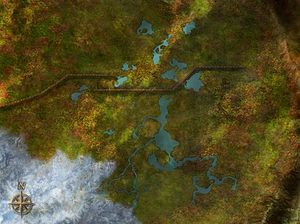 Ascalon seems to have practiced agnatic-cognatic or absolute cognatic elective as its succession law, with rulers elected from the the kinsmen and kinswomen of King Doric. While it is not known definitively whether women could inherit, the Ascalonian historian Loremaster Ermenred suggested in his history of Cantha that Cantha's patriarchal succession laws would not be viewed as egalitarian by his countrymen. Similarly egalitarian is the alternative name "Republic of Ascalon" and the means by which King Adelbern ascended to the crown, although the fact that the brother of the previous king (Duke Barradin) had a strong claim to the throne after Adelbern's accession suggests that primogeniture did have some important role to play.

In Ascalon, magic was applied only to things of import—when ordinary means could not succeed.[2] This was in contrast to Orr, where magic was used far more freely.

The Ascalonian language used a runic alphabet, making it versatile for writing and clearly translatable. Although most Ascalonians could not read or write, Ascalonian was easily recognized and was used everywhere on contemporary structures and ancient artifacts, as well as other sources.[10]