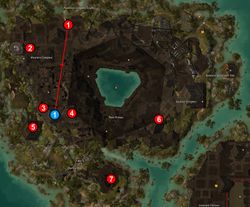 Rebooting IG-6417 is an achievement. The player is tasked with downloading software from Inquest Consoles to reboot IG-6417 for which the

Inquest Passcode needs to be obtained first. Only one module can be handed in to IG-6417 per day, requiring at least 7 days to complete this achievement.

Anomaly:
It is possible to bring Module XD-356 directly to Hero-Tron without attempting to install it in IG-6417. However, IG-6417 will not recognize the Revised Module XD-356 until presented with the original module, which can be obtained again from the console.
Sandswept Isles
Retrieved from "https://wiki.guildwars2.com/index.php?title=Rebooting_IG-6417&oldid=2498279"
Categories: