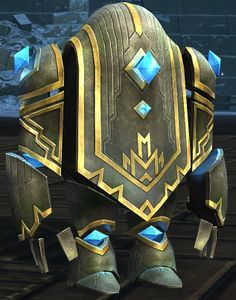 PM-632zs are golems, usually seen coupled with Peacemakers. Judging by how they are by Peacemakers and their quotes, it is assumed that "PM" means Peacemaker.

Defeat the Imbued Mark I Golem (12)

Drive off the Inquest at Survivor's Encampment (12)

Defend Wikk as he calibrates the asura gate (55)

Defend the supply of energy from krait (65)

Section-stub. This key section of the article is incomplete. You can help the Guild Wars 2 Wiki by expanding it.
Reason: Norn variant dialogue?

(If human, charr or sylvari)

Cancel.
(If human, charr or sylvari)

No. None of that.