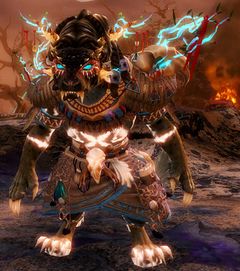 We have to go on the offensive. Drive the invaders out of our lands.

Boticca is a charr stormcaller from the Olmakhan tribe. She advocates taking a stand against forces which threaten the tribe.

A Bug in the System[edit]

Born to the Olmakhan tribe of charr living in Atholma, Boticca was raised with the tribe's values and became a formidable stormcaller. She was captured by the Inquest, who had arrived on Sandswept Isles, and was placed in a containment tank in Lab Sigma-05 where the asuran researchers were planning to test the effects of the Scarab Plague on her in 1331 AE. Despite having witnessed the demise of the rest of the captives, Boticca remained defiant in the face of death and swore to make the Inquest pay for what they had done.

When the sudden arrival of trespassers distracted the Inquest, Boticca broke free from containment and attacked the researchers with the newly arrived group's help. Deciding to join forces with the newcomers, she informed them how to get out of the facility as well as the where the main Inquest complex, Rata Primus, was located. As the lab self-destructed, Boticca and the rest of the group jumped out just in time to avoid the explosion although they were shaken up by the blast as they washed ashore.

After recovering, Boticca learned more about the group which consisted of the Pact Commander, the norn Braham Eirsson, the charr Rox and the devourer Frostbite. When the Commander suggested that they and Boticca's tribe should work together to thwart the invading Inquest and Awakened in the region, the stormcaller agreed and offered to escort the group to her village after mounting her summoned skimmer Ghostwind. As they traveled to the village, Boticca told the group the name of her people and how they had fled from the Flame Legion long ago. She inquired whether Rox was of the Flame Legion and did not care about Rox's gladium status much to Rox's surprise.

The villagers were delighted to see Boticca return, but the guards only let the Commander accompany Boticca to the council chamber due to being suspicious of outlanders. The tribe's elders welcomed Boticca but were suspicious of the Commander even when Boticca supported the Commander in asking for the Olmakhan to take the fight to the invaders who were threatening their way of life. The arguing was interrupted by the arrival of Efi who inquired about her missing father; when the elders tried to keep the truth about his demise from Efi, the cub stormed off. Worried for what the grieving cubs might do, Boticca asked the Commander to check up on them while she would tell the elders about her experiences with the Inquest.

Shortly after, the Inquest sent a raiding squad of golems to the village to capture more test subjects and kill any who refused. Elder Narn died protecting his fellow elders and Boticca from Mark II Beta Exterminator Golem much to everyone's shock. After the golem raiding squad had been destroyed, the Olmakhan gathered to honor Narn's passing while the elders decided to pledge the tribe to Boticca and the Commander's cause.

With all Olmakhan standing behind them, the Commander's party and Boticca began planning a way to reach the heavily defended Rata Primus. Boticca learned that the group had a dragon ally, Aurene, who scouted the cube's perimeter. Boticca provided the Commander with intel on how to breach the complex's communications tower to hamper Inquest coordinating their troops. She also pledged to send the Olmakhan to the sites the Commander had already sabotaged in order to keep the Inquest from reclaiming and repairing the sites.

Once the Inquest perimeter facilities had been sabotaged, the Commander's party and a group of Olmakhan stormcallers led by Boticca boarded the airship of the Commander's corsair ally Sayida the Sly who had arrived to offer her assistance for the assault on Rata Primus. Boticca and other stormcallers summoned a storm to destroy and hamper the Inquest's defenses, and the airship successfully breached the cube, allowing the Commander and Braham to search the complex while Rox led a group of Olmakhan against the Inquest and Awakened in the area.

Boticca was among the people welcoming the Commander and Braham back just as Rata Primus exploded. She noticed that the pair were now accompanied by new acquaintances: Blish, Gorrik, and various domesticated insects. Talking with the Commander afterwards, Boticca expressed relief over no longer having to worry about further Inquest meddling. The Olmakhan would have to elect a new person to take the late Elder Narn's place in the Council of Five, but the stormcaller knew that the Olmakhan had faced hardships before and would persevere.

[Group Event] Use oil reclamation pumps to clean up the spills! (80)

[Group Event] Defeat Sulypix before it drains your reclaimed oil (80)

At Olmakhan Camp
This place reeks of the dead, Commander. But the Olmakhan will hold it as long as we must.

Do you have everything you need?

Normally I would say Nature provides...but not here. Rox knows more about what we need. You should ask her.

How are you holding up? (same as below)

How are you holding up?

I've had nightmares more pleasant than this place. But you shouldn't worry about us, Commander. When the path to Kralkatorrik is clear, the Olmakhan will be fighting right beside you.

Do you have everything you need? (same as above)

I look forward to it.

At Dragon's Snare, Dragonfall
No storm is meant to last as long as his.