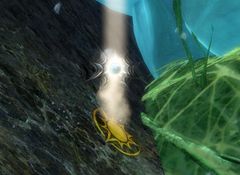 This insight is only accessible in the Dragon Response Mission: Bloodtide Coast instance (either of the Public or Private versions work). The point is underwater in a small crevice formed between the ice sheet on the surface of the water and two quaggan structures.

To enter the water, approach from the southeast side of the ice sheet, north of the Lionguard fort, in the deeper part of the water that hasn't been frozen over. From there, swim northwest into the quaggan village. Near the surface of the water (currently ice) on the eastern rock face, there are two light green quaggan structures near a quaggan named Poukounah. There is a small hole between the two structures and the ice sheet on the surface, and the mastery point is within the crevice.

Draconic energy pulses and roils in this location.

You have reached a locus of power.