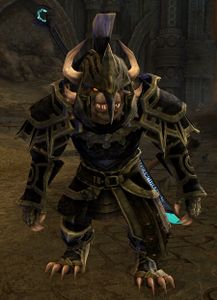 Irwen is a charr member of the Vigil acting as the scout for The Grotto in the Thunderhead Peaks.

The Pact is presently occupying the Path of the Exalted. The Exalted seem pretty pleased to see us.

With everyone else occupied, Gorrik's managing the barracks. From what I've heard, he's overwhelmed.

Marshal Thackeray's running exercises over here. He thinks corsairs can be trained to fight in formation.

Out here, hordes of Branded overrun the barbican. The tribune's got some ideas about that.

Commander. What do you need to know?

Give me a full report of the area. (Same as the scouting report.)

Tell me about what's going on.

She knows the value of discipline and training, even if she's not for it herself. You could help them with fighting formations, if you want.

I want to know something else.

Are there any weak points we should defend?

Rifts keep opening near the barbican. Bombs and siege engines would help. Canach probably has an idea or two.

He's in over his ears, but you didn't hear that from me. I'm sure he'd appreciate a hand.

Just some friendly sparring between Logan's and Rytlock's soldiers.

What do we know about the dwarven catacombs?

Not much. Some notable dwarves were burried there, along with their treasure. But we can't figure out how to get inside.