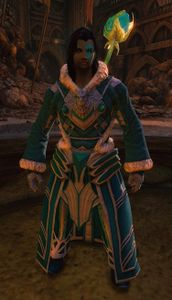 Strength of will and a bit of heart can go pretty far.

Myrun Skialkin is a norn member of the Order of the Crystal Bloom who used to be a member of the Durmand Priory. They defend Thunderhead Keep from destroyers and offer Braham Eirsson advice on how to embrace his role as the Norn of Prophecy.

Myrun Skialkin used to work for the Durmand Priory but joined the Order of the Crystal Bloom some time after Aurene's rise.[1] In 1333 AE, they helped the Pact defend Thunderhead Keep against the Elder Dragon Primordus's invading destroyers and welcomed Braham Eirsson and the Pact Commander who had arrived at the keep to assist the besieged troops.

After the party had helped boost the morale of the survivors, they advanced deeper into the keep and discovered that a group of Deldrimor stone dwarves had emerged from the Depths of Tyria to battle the destroyers. Myrun was surprised to see so many dwarves on the surface but quickly joined the Deldrimor's side as the party headed deeper into the keep. Myrun exchanged words with Braham about Jormag being a twin of Primordus and whether that would validate the theory that only the twin Elder Dragons could kill one another. When Braham expressed doubt how Primordus being Jormag's weakness would fit into the Norn of Prophecy's destined role to slay Jormag, Myrun reminded Braham that the truths of prophecies would not become clear until they had come to pass.

The party eventually discovered a large wyvern, the Destroyer of the Last Forge, leading the invasion and battled it to drive back the rest of the destroyers. Myrun suggested that the Commander use Aurene's gift to alter the power of the Dragonsblood Spears to injure the destroyer champion and that Braham should use his connection to the destroyers to distract them so the Commander could inflict damage on the champion.

After the party had triumphed over the destroyers, Myrun thanked the Commander for being granted an opportunity to fight alongside them. Myrun also encouraged Braham by stating that they understood the weight Braham was carrying as the prophesied hero while reminding Braham that his actions would be for nothing unless he had his heart in the fights to come.

Myrun spent some time in Thunderhead Keep cleaning up the aftermath of the destroyer attack. Following the deaths of Jormag and Primordus in the clash at Anvil Rock, Myrun attended to Aurene in the Eye of the North. Later, the scholar traveled to Hoelbrak to enjoy Dragon Bash and met up with Braham who was not in a festive mood despite many norn celebrating two Elder Dragons' demise. Myrun revealed that they had arrived to defend their high score in Hologram Stampede while Braham admitted to have come for the starcake. Myrun approved of Braham's taste, stating that Asta made the best starcakes.[2] In a subsequent conversation with the Commander, Myrun explained what they had been up to since Thunderhead Keep. The scholar also pointed out the origins of Dragon Bash which they found problematic and suggested that none in the group should tell Aurene about the group attending the festivities to celebrate the slaying of Elder Dragons as Aurene might take the news the wrong way.

Hoelbrak during Dragon Bash 2021
Commander, good to see you. I hope you're taking some time to enjoy the festival. This is a celebration of your legend as much as anyone else's.

Are you just visiting Hoelbrak?

Well, I need to stock up on Jorbreakers for the year. See you around.