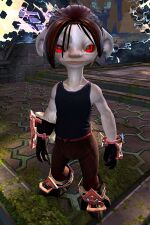 Now you're in my domain. I set the parameters. I control the variables. Try to keep up.

Arkk, originally known as the Mysterious Asura, is a recurring antagonist and a moving plot involving the Fractals of the Mists that runs parallel to Living World Season 3. His identity and plans remain shrouded in mystery, though it is known from journals he left behind that he—and perhaps the krewe he led—had been studying the Mists and, more specifically, on destabilizing the fractals within.

Arkk has a device he has dubbed the Diaphanous Diffraction Randomizer (or DDR) which he uses to cause "chaotic instabilities" to destabilize and reduce cohesion of the fractals. He also has the ability to block Dessa's means of communication.

In the Chaos Fractal, Arkk (As the Mysterious Asura, and printed in the dialogue box as “Mysterious Voice”) was first introduced to the players. He claimed that he’s been in the Chaos Isles for some time, and was irritated because the players might disturb him. As the player explored further into the Chaos Isles, he tried everything he could to stop these intruders, including obstructing Dessa, sending golems, the Chaos Anomaly, a blizzard and finally the Legendary Brazen Gladiator. When the players defeated the Brazen Gladiator, he was furious, saying he would kill player, but his DDR’s been out of energy, then he teleported away.

In the Nightmare Fractal, Arkk finally revealed his name and claimed to be chased by (and having a debt toward) the Inquest. After a brief alliance with the adventurers visiting the fractal who helped him clear a path through the reimagined Tower of Nightmares, he ran off with the core of the fractal which he had recovered after the defeat of Ensolyss, warning the adventurers not to follow him.

In the Shattered Observatory Fractal, Arkk was revealed to be Dessa's son, with a plan to try to break himself and her out of the fractal loop. However, he ultimately realized that neither he nor Dessa were real, as they were only fractal echoes of their former selves. Coming to terms with his existence, Arkk assisted Dessa with stopping his machine from destroying the fractals and shared one last moment with her before the fractal would eventually loop again and put him and her right back where they started.

Section-stub. This key section of the article is incomplete. You can help the Guild Wars 2 Wiki by expanding it.
Reason: Missing combat abilities from new fractal

Section-stub. This key section of the article is incomplete. You can help the Guild Wars 2 Wiki by expanding it.
Reason: Missing his melee attack below 40% and tooltips for Supernova and Force of the Nightmare