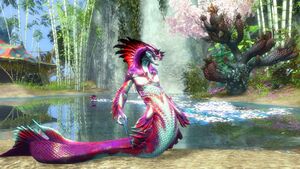 A naga on Shing Jea Island.

Naga hides are extremely versatile; they have been observed to be suitable for making drums with,[2] padding the undercoating of armor with,[3] and even building furniture with.[4] It is claimed that their hides, over time, become attuned to the magic of the Jade Sea.[3]

Before the Jade Wind, naga were a peaceful race and coexisted with the Dragon Empire. Naga traded with humans and would serve as mercenaries for human employers. Organized religion among naga was commonplace, though what they worshiped was unknown. Certain naga have been referred to as "Blessed of Dwayna", implying that they may follow the Six Human Gods.[5] They had moral codes passed down through the generations teaching them to limit their propagation.[1]

After the Jade Wind, naga formed tribes[6] and cast away their former peace with humans in order to exact revenge for the transformation of the sea to jade.[1] At some point, they began ornamenting themselves with jewels, cloth and metal.

Naga were peaceful at the time of the Dragon Empire's formation and coexisted peacefully with the Luxon Armada in the Jade Sea. With the advent of the Jade Wind, the naga race was almost driven to extinction. Thousands of naga transformed into jade with the sea, while others died alongside humans on land. Only a few dozen naga survived, among them the priestess Hanasha Coralfin. The priestess used her magic to heal the few survivors and in turn ordered those survivors to search for other living naga and bring them to her. After some time, the approximately forty naga left alive gathered before Hanasha, who guided them to abandon their moral codes and to spread and propagate freely, in order to inflict revenge on the Dragon Empire for the near annihilation of their race. They took control of large stretches of Jade Sea coastline, and launched attacks on the Luxons.[1]

During the kind-hearted Empress Tahmu's time, a horde of naga attacked the imperial city, and, not wishing to abandon the city's inhabitants, Tahmu beseeched her people to take up arms and went to do battle with the naga. She was captured, however, and forced to witness every last citizen being tortured and murdered. In an unreasoning fury, Tahmu broke free from her bonds and rained down fire from the sky, streaking through the streets in the form of a dragon to incinerate the naga invaders.[7]

Within the lifetime of the Shing Jea Island villager Miller Quang, the naga population inhabiting the island increased greatly,[8] and as a result, some inhabitants of Daochu Village took up arms and went to battle the naga, carving their way through the hostile naga until they encountered a particularly hostile and powerful individual of the serpentine race which was dubbed Xsshsss Zsss, and which wiped out the party attempting to drive off the creatures. Very few of the villagers managed to survive Xsshsss's attack and those that survived fled headed to Kaineng City in order to escape the naga.[9] After the attack, the naga tore several of the village's huts apart.

In 1582 CC (1072 AE), a bedeviled naga appeared in Raiyan Cave, where it was thought by the necromancer headmaster of Shing Jea Monastery to be the source of the Affliction, a "disease" that in actuality was caused by individuals going too close to the malevolent spirit of Shiro Tagachi. On Headmaster Kuju's orders, a necromancer hero slew the naga, though the Affliction remained. Later that year, the soldiers of Captain Elora of the Crab Clan captured a group of hostile elder naga in the Jade Sea, where the elder naga were soon killed by human heroes.