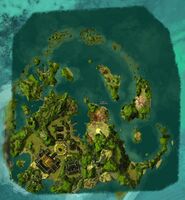 Map of Isle of Reflection

Off the coasts of Shing Jea, where sea spills over into sky, an isle slumbers. Though its shores seem undisturbed by imprints of the past, I advise you, look closer. When the waves recede, what tales may you find etched in the sands of time? Like the ebb and flow of tides, we all waver between past and future across life's eternal ocean. And in walking their intersection, we pave our path in the footprints we leave behind. As you embark on your journey, ask yourself: What story shall I impart in my wake? The answers awaits at the Isle of Reflection.

The Isle of Reflection is a Guild Hall introduced with the End of Dragons expansion. It is a beachfront area located at the site of the former Shing Jea Arena, with plenty of water suitable for skiffs and fishing.

Travel to the Isle of Reflection entrance, located on the southern coast of Shing Jea Island in Cantha. Meet Minister Nguyen's representative on the island and drive any squatters out to claim this guild hall.

— Expedition to the Isle of Reflection

Evict the squatters to claim the Isle of Reflection for your guild!

By longstanding tradition, full-scale arena combat was prohibited on the rural island of Shing Jea in Cantha, out of reverence for the monastery of the same name. As the students at the monastery required a place to train various combat arts, however, the Shing Jea Arena was constructed on the tiny island of Tinnairukan south of the larger landmass. The location was selected because it was close enough to train, but separated from Shing Jea Island itself.[1]

After founding the Ministry of Purity, Minister Reiko Murakami and her ward and nephew Ashu visited the garden of Tinnairukan once every week. While the Ministry continued tightening its grip over Cantha with plans to exterminate or expel any undesirable elements—including the Afflicted, criminals, peasants, and non-humans—Reiko's niece, the assassin Miku, felt that Reiko had to be stopped before she would shape Ashu and Cantha to her ideal and trade Canthans' freedom for ironclad security where only Reiko's chosen would thrive.

In 1589 CC (1079 AE), Miku allied with the Hero of Nightfall's party and confronted Reiko and Ashu at the island's garden, using the element of surprise to catch the pair off guard when they had fewer guards around them than usual. Impressed that her niece finally had the courage to face her, Reiko tried to break Miku's resolve with her words before the Hero interjected and openly challenged Reiko about manipulating the Hero earlier to advance her own ends. Realizing that the dispute with the zealous minister could no longer be settled with words, Miku and the Hero resolved to assassinate Reiko whose guards rushed to the rescue.

Reiko proved to be a powerful mesmer and strong in her conviction, however, and would have triumphed in battle if not for the timely arrival of other groups that had been affected by the Ministry of Purity's actions and whom the Hero had helped survive earlier. The Hero's allies ranged from the Angchu tengu led by Soar Honorclaw to wronged Shing Jea residents, some atoning Ministry soldiers who had realized that Reiko's methods were too extreme, as well as the criminal Am Fah and Jade Brotherhood gangs. Ever zealous, Reiko defiantly fought to the bitter end, proclaiming that she would die a martyr and someone else would inevitably finish the work she had begun to purify Cantha from undesirable elements. In the battle's aftermath, Ashu chose to remain in the Ministry and become its new leader, claiming that he would be seen as a symbol of hope and that he would not repeat Reiko's mistakes. A somber Miku respected her younger brother's wish and bid him farewell, leaving the island along with the Hero and their allies.[2]

In the tumultuous decades that followed Reiko's fall and the civil war that led to the dissolution of the Ministry of Purity in 1747 CC (1237 AE),[3] Tinnairukan fell into disuse due to its troubled history and was taken over by squatters wanting to avoid the public eye.[4] Having lost the old arena dedicated to the god Balthazar there, Shing Jea Monastery and the imperial regime allowed full-scale arena combat on the monastery's training grounds.

After Cantha had opened its borders and welcomed in the multiracial Tyrian delegation as the first diplomatic step in establishing relations in 1845 CC (1335 AE), the empire negotiated a deal with the Tyrian governments: in exchange for clearing the Isle of Reflection from persistent squatters, a Tyrian guild would be allowed to claim the isle for themselves as long as they occupied and maintained it.[4] However, the Ministry of Urban Planning had only granted a temporary land-use permit for any guild attempting the task: failing to clear the premises in set time would deny the respective guild the right to claim the isle for their guild hall.[5]

Krytan ambassador Kasmeer Meade joined Canthan bureaucrats Akane and Bian with an aspiring Tyrian guild to evict squatters, who turned out to be Purists following the ideology of the fallen Ministry of Purity, from the Isle of Reflection.[6] After succeeding in the task, the guild claimed the freed hall and established a base of operations on newly opened Cantha. 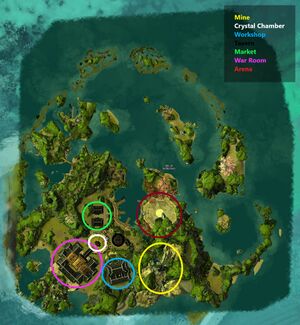