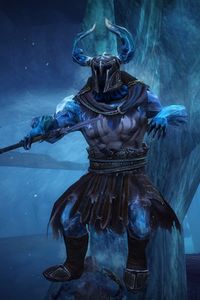 Wollam the Plunderer is a powerful Son of Svanir located in Honor of the Waves and serves as the final boss to the plunderer path of explorable mode, fighting the players underwater. He believes killing the Kodan will earn him Dragon's favor and is stealing their cultural artifacts to empower his master. If not stopped, he threatens to completely erase the Kodan's history and culture.

Section-stub. This key section of the article is incomplete. You can help the Guild Wars 2 Wiki by expanding it.
Reason: Missing stolen skills, but if none remove this part