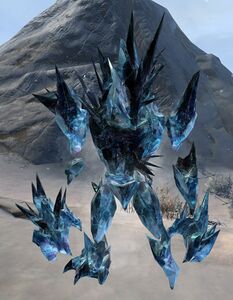 Veteran Corrupted Ice Elementals are a special type of Icebrood Elementals summoned to aid the minions of Jormag that have the ability to encase their enemies in Ice Prisons.

Defend Njordstead villagers from the icebrood (17) (Not a guaranteed spawn.)

Section-stub. This key section of the article is incomplete. You can help the Guild Wars 2 Wiki by expanding it.
Reason: Likely to be "Ice Shard Stab"