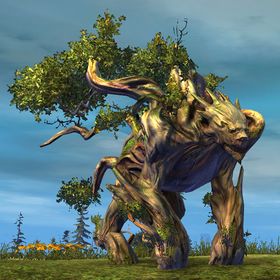 Treants are tree-like creatures that are known to mash up animals they encounter and use the remains as fertilizer for their young.[1] Treants look different depending on the region they are in, having features of the native plants. Certain treants can be seen embedded in the ground as they're still growing, though most are mobile and unattached to the ground.[verification requested] They are capable of creating roots, despite having none themselves, and are able to influence the plantlife around them.

Some treants, mainly in sylvari lands but also elsewhere on occasion, are used as beasts of burden to carry supplies or weaponry across long distances, in a similar way to pack bulls, pack dolyaks and pack marmoxes.