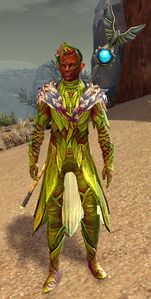 I will make you hear me, Mother, like it or not. When I am finished and you are free at last, then I will be first in your heart!

Cadeyrn, born of the Cycle of Noon, was the first of the secondborn sylvari to awaken. In time, as he witnessed the harm of the world and heard the darker emotions of his heart, he would come to see the teachings of Ventari as a shackling weight on the sylvari. Because of this, he established the Nightmare Court with the belief that in darkening the Pale Tree's pool of memories, the sylvari will be free of the Tablet's impositions and finally reach their true potential.

Prideful even as he awakened, Cadeyrn showed signs of having shadows close to his heart. In time he became a capable warrior, but he was one whose versions of logic and justice were different from other sylvari. It was this difference in ideology that would eventually turn his blade against both The Grove and the world. He was there to witness the aftermath of Malomedies' first bitter contact with the asura, and in battle he saw no hope in mercy.

He grew jealous of the attention the Pale Tree had given to the firstborn and came to believe that the secondborn should have as much a say in matters as their elder siblings did. In each occasion, Cadeyrn only saw peace through aggression, and as each turn was stymied, his enmity of the Tablet grew. Despite a supplication to the Pale Tree, Cadeyrn began to see one thing clearly: the sylvari, with hands tied by the Tablet's teachings, would never be whole. With this thought in a jealous heart, he began his campaign to make the Pale Tree listen to him, and to unleash the sylvari from false morality.

In 1325 AE when the Nightmare Court was at the peak of its power, Caithe and a group of adventurers, including the Pact Commander, invaded Twilight Arbor to end Faolain's reign of terror. The Grand Duchess lured Caithe deeper into the arbor in hopes of using her manipulations and illusions to turn her former lover to her side. Faolain sent various champions after Caithe to test her skills and wear her down both emotionally and physically, and Cadeyrn was among these champions. Cadeyrn was eager to battle Caithe, unleashing all his hatred of the firstborn on her but was ultimately bested and slain before Caithe's party pressed on to confront Faolain herself. Cadeyrn, the founder of the Nightmare Court, had fallen with little fanfare, and his legacy would be overshadowed by Faolain's deeds in the minds of sylvari for years to come.