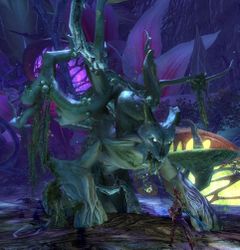 The Nightmare Tree is a treant cultivated by Faolain in Twilight Arbor that amplifies the darkest desires of the owner[1] and is described by some as being twisted, cruel, as if it was whittled out of hatred.[2] After Faolain was forced from the area, high ranking Nightmare Courtiers fought each other for control over the tree. After the tree was eventually destroyed, Morrigu claimed it has to be broken into pieces and burned to prevent anyone from reviving it.[3]