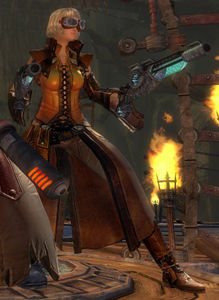 Kernan is one of Sabetha's lackeys. During the confrontation with Sabetha, she is summoned to fight alongside her. Kernan will only appear after Sabetha reaches 75% of her health and retreats to her bomb pile.

Kernan was modeled similarly to Bandit Sappers, sharing the dual pistol wielding; but not the Sapper Bomb mechanic.