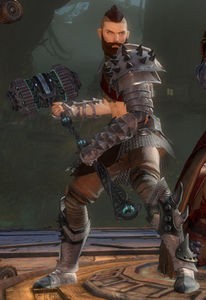 "Knuckles" is one of Sabetha's lackeys. During the confrontation with Sabetha, he is summoned to fight alongside her. "Knuckles" will only appear on the platform after Sabetha has reached 50% health and has retreated to her bomb pile. "Knuckles" will fight in melee range against the players, attacking them with his powerful hammer attacks. Of all Sabetha's lackeys, he seems to be the only one not wanting to be present. He even offers players to reveal something to them before being cut off by Sabetha.

When summoned by Sabetha:

Sabetha the Saboteur: Knuckles, take care of them!
"Knuckles": Stop calling me that!

Sabetha the Saboteur: Knuckles, knock them off the platform!
"Knuckles": You know I hate that name...