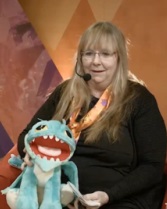 Gaile Gray was the Forum Communications Team Lead at ArenaNet. She started in the game industry as a fansite writer and administrator, worked as a freelance writer for several game developers and publishers, and wrote for various non-game websites and publications as well. She left ArenaNet in February 2019.[1][2]

Gaile served as the Community Relations Manager for Guild Wars through the majority of the game's active development.

On April 7, 2008, she transitioned to a Support Liaison role covering both games.

On September 22, 2014, she moved back to the community team in the newly-created role of Forum Communications Team Lead.

On February 21, 2019, it was announced that ArenaNet "informed employees today that it is planning big layoffs" according to game reporting site Kotaku. On February 25, 2019, Gaile Gray announced on her Facebook page "I am sad to say I am no longer an employee of ArenaNet. It's been a wonderful 18+ years, and I have appreciated every one..." On the official Guild Wars Forums, she posted "Goodbye, beloved Guild Wars 2 Community. I love you all and wish you well in the future."