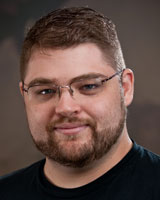 Isaiah "Izzy" Cartwright has been in the MMO industry for 10 years now. He worked on the original Guild Wars for ArenaNet and is currently hard at work as a Game Designer on Guild Wars 2. Isaiah has worked in various jobs in the MMO field ranging from QA to Community to Design. He specializes in economy, skills, and combat systems. Izzy has a very loose interpretation of spelling and grammatical rules and is fond of doing cartwheels. Yes, cartwheels.

Stephen Isaiah Cartwright, Skill Balancer, got started in the gaming industry in 2001 with Asheron's Call. He was involved in Asheron's Call 2 and was part of the Mythica development team before joining ArenaNet. He fulfilled the role of a skill balancer in Guild Wars, and later on had a part as design director for Guild Wars 2.