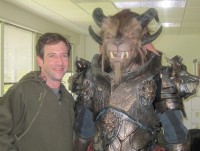 Adam Vance is Director of International Product Management at ArenaNet. He has worked in games localization and international product management for eight years now at ArenaNet, after leaving Microsoft where he worked previously for seven years. Adam is fluent in French and German and has degrees in business and the liberal arts (history, philosophy and a PhD in European literature). Originally from Montreal, Canada, Adam grew up bilingual playing RPGs in English and French as a kid, such as D&D and early online games called MUDs. After spending a number of years in Europe, Adam came to live in Seattle and has a three year old daughter who already loves playing RPGs and killing monsters and zombies with him on his mobile phone!