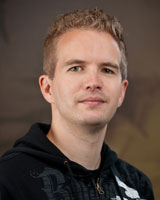 Curtis Johnson is a Game Systems Designer for ArenaNet. Since joining the company in 2003, he’s worked on everything from story and creatures to guilds and skills – even the log-in screen! A longtime MMO and game player, Curtis’ passion is getting players to really interact with the game and making the simple stuff as good as the more flashy stuff. When he’s not thinking about work, Curtis is parenting, BBQing, and cheering for the underdog.

Curtis Johnson was a Game Systems Designer at ArenaNet.