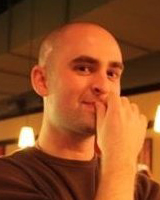 Jonathan "Chaplan" Sharp began working in the game industry as a multi-player designer and balancer for Stainless Steel Studio's Rise and Fall. He worked on content for Guild Wars Nightfall and Guild Wars: Eye of the North, and is currently a systems designer on Guild Wars 2. He has a degree in philosophy and religion and serves as ArenaNet's resident existentialist. He predicts that sharks will one day become the dominant species on the planet.

On October 9th 2014, it was announced that Jonathan Sharp would be leaving ArenaNet. [1]