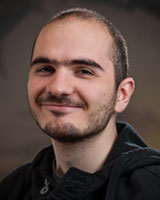 Horia Dociu is a former Chief Art Director for Guild Wars 2. He was born in Romania and trained at the Digipen Institute of Technology.