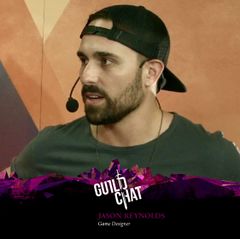 I love the kitty golems.

Jason Reynolds started working for ArenaNet in early 2015 and was brought on explicitly to work on Raids development. Along with Crystal Reid, Reynolds has appeared a few times on Guild Chat livestreams and talked about the raids on official blogposts.

In July 2018, Jason has transitioned from leading the Raids and Fractals team to leading the Living World team.

In November 2019, he left ArenaNet and went to work at Bungie the next month.