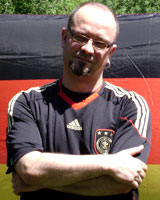 Martin Kerstein is the Community Team Lead and German Community Manager for ArenaNet. He has supported the Guild Wars community since 2006. He started at NCsoft Europe and moved to the U.S. in 2009 to join the community team there. When he's not herding cats, he plays games, listens to music, or caters to his movie addiction. He is also secretly plotting to make currywurst popular among his American friends.