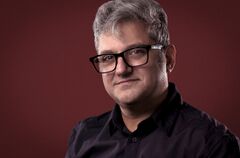 Bobby Stein is the Guild Wars 2 Lead Writer. Before joining ArenaNet in 2005 he wrote preview and strategy pieces for Xbox.com and Nintendo Power, crewed on television shows like 48 Hours, and spent a few years on a Wall St. trading floor. When he’s not busy obsessing over dialogue scripts or voice-over files he spends his time growing an epic moustache. He is also not Mel Tormé.

Bobby Stein is the Narrative Director in the Narrative Team at ArenaNet. He works with team members and the producer to "keep the ship sailing smoothly", with his job being a mix of management, creative input, and career development responsibilities. He directly manages the writer/narrative designers, who are responsible for story development, script writing, and owning dialogue and text in the game, and also manages the editing and VO leads.