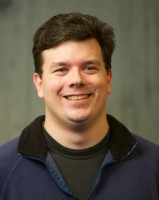 Mike Ferguson is a systems designer at ArenaNet with over 10 years of MMO development experience. After starting out in customer service for Dark Age of Camelot at Mythic Entertainment, he quickly worked his way into a development position and eventually led the Camelot live team for a year before heading to the Seattle area to work at ArenaNet. During his time at ArenaNet, Mike has built numerous missions and quests for the original Guild Wars series, helped develop the content tools that built Guild Wars 2, and most recently has focused extensively on creating World versus World. Outside of work, Mike enjoys exploring the scenic northwest with his wife, playing games of all kinds, and doing whatever he can to avoid writing about himself in the third person.

Mike Ferguson was a Game Designer at ArenaNet until he left in January 2014.