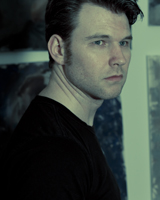 Aaron Coberly, Lead Character Artist, has worked as a character artist in the game industry since 2000. He has worked on games like Drakan 2 and The Suffering for Surreal software. While at ArenaNet, Aaron worked as the lead character artist on Guild Wars Prophecies, Factions, Nightfall, and Eye of the North. Aaron is also a painter, and has been featured in group and solo shows in galleries throughout the Seattle area.

Aaron Coberly is the Art Director and Lead Character Artist for Guild Wars 2 at ArenaNet.