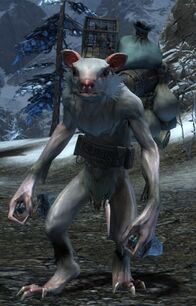 Bookworm Bwikki is a target of the Guild Bounty. Wanted for unauthorized removal and vandalism of books as well as nonpayment of library fines. Last seen fleeing down snow-covered slopes from a library.

I'm smart, see? I got lots of papers filled up with squiggles.

We're here to bring you in, along with the things you've stolen. (with bounty active)

When event starts
You're gonna get it, and I'm gonna give it to you!
When defeated
Nope. No more. Done.