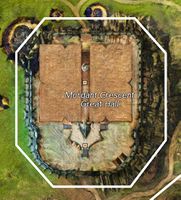 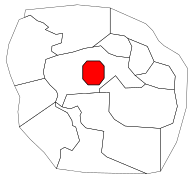 The Mordant Crescent Great Hall, previously known as the Sunspear Great Hall, is an area in the Domain of Istan.

The Sunspear Great Hall was one of the oldest standing structures in Istan, dating back to the days of Sogolon the Protector, who transformed the Order of the Sunspears into an independent order that was dedicated to protecting Elona. Before Palawa Joko's reign, the Great Hall boasted large, twin fountains that represented the primeval roots of the Sunspears, while the Great Hall itself stood to act as a memorial for many generations of heroes that once inhabited it. After Palawa Joko conquered Elona, the Great Hall, now known as the Mordant Crescent Great Hall, underwent many changes, both functionally and visually. The Great Hall is now used as a mustering ground for the Mordant Crescent and details like the twin fountains are no longer present. There is still a statue that stands in front of the structure, although that statue is now that of Joko.

[Group Event] Clear the Awakened forces from the courtyard (80)

Section-stub. This key section of the article is incomplete. You can help the Guild Wars 2 Wiki by expanding it.
Reason: List of Foes may be incomplete, remove if everyone is here