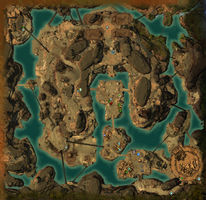 The Lost Precipice is a towering canyon hidden on the border between the Heart of Maguuma and the greater Maguuma wastes to the North.

Lost Precipice is a guild hall in a hidden canyon refuge. It is where the Forgotten and a select few Zephyrites began their journey together.

Travel to the sunken shrine that marks the hidden entrance to the the Lost Precipice, in the northwest part of Verdant Brink. Meet Sarah McKenzy inside the precipice, and clear the Mordrem infestation there to claim this guild hall.

— Expedition to the Lost Precipice 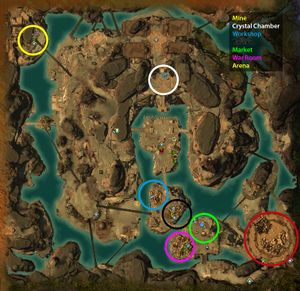 Section-stub. This key section of the article is incomplete. You can help the Guild Wars 2 Wiki by expanding it.
Reason: Missing other NPCs, such as upgrades for War Room Restoration 1/2 from Sophia Carriker

After War Room Restoration 1
Sophia Carriker: I'm glad to see the guild has decided to invest in a war room.
Sophia Carriker: I think you'll find that a little bit of planning—tactics, defenses, and the like—can go a long way toward victory.

After Mine Excavation 1
Rekka: Finally! We're breaking ground on the mine! Uh, literally and figuratively speaking.
Rekka: Let's go see what the dig site looks like!
Rekka: Hmm. Not bad, not bad at all! Solid geology. Plenty of room for expansion.
Rekka: I just know we're going to find tons of raw aetherium here. You'll see!
Rekka: And in that vein...heh...I do have some thoughts about increasing efficiency.
Rekka: For example, do the miners really need three entirely separate meal breaks? Why not eat everything at once?

After Mine Excavation 2
Rekka: Excellent. Expanding the mine will allow us to increase production!
Rekka: We're definitely going to need more aetherium storage tanks.

After Mine Excavation 3
Rekka: I'm very pleased. This place is finally starting to look like a functional mine.
Rekka: Since we have the space, I'm thinking we should move the miners' beds in here. Get rid of that wasted travel time!

Sarah McKenzy: I'm proud to be the liaison to your guild. You guys are amazing.