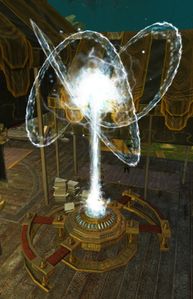 Interact with the aetheric assembly device in the workshop to open the assembly queue. Crafting schematics will appear here and can be queued for assembly, which takes a varying amount of time. This process can be cut short by spending resonance. When a schematic is fully assembled, it will appear in the guild's storage panel.

Assembly Device is an object found in each guild hall used for queueing schematics.