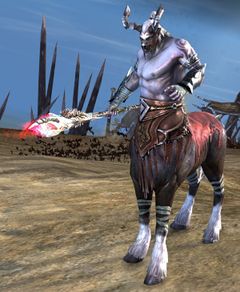 I am the Ulgoth! I command! I define! I demand! At my hands, you die!

Ulgoth the Mighty, also known as Modniir Ulgoth, is the tyrannical War King of the Modniir centaur tribe and leader of the centaur alliance. Driven by his hatred, Ulgoth does not allow dissent within his tribe and is willing to kill any centaur who does not follow his command to eradicate his enemies in Kryta.[1]

Ulgoth re-united the Modniir tribe nearly 200 years after it had almost been brought to extinction by the Ebon Vanguard and norn in the Far Shiverpeaks.[2] He then used the Modniir to dominate the Harathi and Tamini tribes and formed the centaur alliance to seek revenge on those who had crushed his ancestors and, later, killed his family. He vowed to kill or enslave as many humans and norn as he could.

Using the respective strengths of the three centaur tribes to his advantage, Ulgoth and his commanders used the Harathi Hinterlands as a staging ground for their campaign. They spread southeast into the Shiverpeak Mountains and southwest into Kryta, establishing footholds as close to Divinity's Reach as Queensdale. Despite his hatred of humans in particular, the War King was willing to have a mutual non-aggression treaty with Lion's Arch and Lionguard havens throughout Kessex Hills despite the centaurs viewing the land as belonging to the centaur alliance. He used emissaries to keep up diplomatic relations in Triskellion Vale and had them investigate whether Lionguard were smuggling supplies to the Seraph while he denied rumors of centaurs attacking merchants under Lionguard protection.[3]

The centaurs had a successful campaign at first and reached as close to Divinity's Reach as the Village of Shaemoor in 1325 AE. However, Krytans eventually began pushing the centaurs back and led a counterattack deep into the Harathi Hinterlands. Although Ulgoth mocked their efforts as futile, the humans and their allies managed to breach War King's Greatcamp to confront him. Ulgoth fought the assault force, proving himself to be a skilled shaman as he summoned Earth Elemental Hands to assist him. The War King was ultimately felled, however, sending the Modniir into disarray for a time.

In 1330 AE, investigations of Caudecus's Manor revealed that Minister Caudecus had sent Captain Tervelan to kill Ulgoth's family and laid the blame on the Seraph's Falcon Company to entice the centaurs further into war with Kryta while pinning the blame on Queen Jennah.[4] At the same time, Caudecus had been in communication with Ulgoth. In an attempt to gain the War King's trust, the minister had granted a centaur war party passage through Beetletun lands in order for them to directly assault Shaemoor Garrison in 1325 AE. Ulgoth had been made aware of Caudecus's White Mantle connections but did not know of the minister's involvement in Tervelan's actions. The War King had initially been skeptical about Caudecus's promises but had approved of the raid on Queensdale to see if the minister was true to his word.[5]