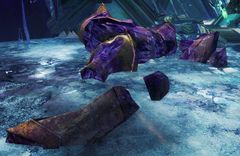 Big Snaff was an eighteen-foot tall cephalolithopathic golem designed by Snaff, and with a head carved by Eir Stegalkin. It was lost in the Dragonspawn's inner sanctum. The destroyed golem was later found by the newly-formed Destiny's Edge, many miles from the lair of the Dragonspawn. Its stanchions were shattered and the servos were split, although Zojja suspected some of the thylid crystals and gear work would be salvageable.

A second Big Snaff was later built in preparation for the battle with the Destroyer of Life. He had a water cannon mounted above his left hand and rock drills inserted into his right. His chest was an armored cockpit in which Snaff hung on a harness, sending signals through a powerstone laurel. When Destiny's Edge traveled to the Crystal Desert to defeat Glint, it had been completely redesigned. In the battle with Kralkatorrik, the dragon's second breath—the one that left the starburst shape in the desert, visible even on the world map, turned all things nearby, including Big Snaff and the dragon's own minions, to stone. When more minions came, Snaff was occupied in the dragon's mind, having stepped into it using a powerstone portal. He was not prepared for the minions when they converged on Big Snaff, toppling the golem and tearing its creator to pieces.

Big Snaff was left in Glint's Lair, its surface crystallized by Kralkatorrik.