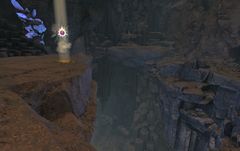 Head east from the

Allied Encampment Waypoint — over the bridge. Soon you will face another bridge. Go under the bridge into the cave.

For this path you need the High Vault mastery.

Enter the cave with the mastery point. Walk up to the wall on the northeast side (opposite the mastery point). Carefully position your Springer to avoid the ceiling and work your way up the wall - there will be an orb of Volatile Magic to mark the way. Reaching the ledge with the orb is much easier with the Bond of Faith mastery. Once you reach the top, follow the ledges round counterclockwise to reach the insight.

There is an alternative, easier way to get there with the springer. Climb the rocks on the most southern point of the cave easily with your springer up to a smooth sandstone level. No need to jump on the dark rock on the top. Then at the end of the sandstone patch you will see a small crack on the rock above you. Jump up there with the springer but then unmount because you will not fit through the crack. There is a rock that is quite difficult to jump on while getting through the crack, but either you try to do a precise running leap, or just press forward and spam space for jumping and eventually get up there. Then you get to a large ledge from where you can use glider or raptor to reach the mastery point.

Go to vista above the insight outside the cave. Fly to the east then turn around to face west, such that you are facing the cave entrance. Dive down V and then wing-flap Spacebar to fly into the cave; don't worry too much about altitude at this point, but make sure not to run into anything on the way in, or you'll lose your momentum, which will fuel your pull up C - do this at the last possible moment within the cave to go up and reach the insight.

This can be tricky so it's useful to have some sort of visual aid to help; traps or squad markers, for example, placed on the floor of the cave (just before the insight itself so you have room to fly). If you don't pull up in time, try to spiral around and land on the outcropping with the insight - there's plenty of room up there.