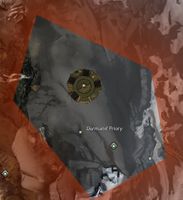 Map of The Durmand Priory

Durmand Priory is the inner sanctum of the Durmand Priory's monastery. It is circular, with a library and a classroom in its center, and sleeping quarters, kitchen, research room, and Steward Gixx's office. Access can be found to the west side of the Heart of the Priory, or by Arcanist Timble if you're a member of the Durmand Priory. The closest waypoint is

Priory Scholar: Why is everything here written in Krytan? All those loops and swirls make my hands ache.
Historian Tribb: The humans say it's because Krytan is the most universal language.
Priory Scholar: How can it be universal? It only has one word for "hunt."

Priory Cook: Time for a break.
Scholar Stinn: Much appreciated.

Priory Cook: Time for a break.
Priory Historian: It's appreciated.