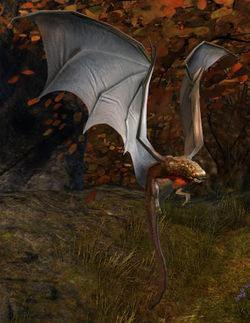 Bats are a typical kind of wildlife seen across Tyria. Though most can be found in Ascalon and Kryta, some can be found in the Shiverpeak Mountains as well as in The Mists. They tend to remain in areas with caves or cliffs, and are more active during night in many locations.

Bats are able to be tamed, as has been seen with the Pact ogres that landed within the Tangled Depths, which used them as battle beasts of necessity in lands unseen to them before then.

Though bats are natural creatures, some look to have taken on an elemental-like aspect, the reason for such remains unknown, though all of the bats of this appearance have been found in volcanic environments.