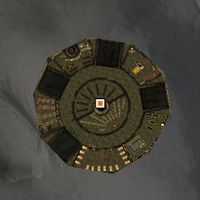 The first three tablets listed below can be found around the Heart of the Priory, and the fourth can be found between the hero challenge and the vendors.

The story of Kalla Scorch-
razor and the charr rebell-
ion against the shaman
caste has been told many
times.
Most historians have
studied "The Battle of the
Plains of Golgheim", and
how Kalla's female warri-
ors, trained in secret for
a generation or more,
dealt a descisive blow
to the Gold Legion.
However, many often forget
that the rebellion began
some forty years earlier
when Kalla's gr[andfat]her,
Pyre Fierceshot ........
.....the shamans ... the
.... f his own Le...

History tells us that
Ascalon City fell in the
year 1090 AE. However,
that date does not mark
the end of the tale of
Ascalon, but the begin-
inng of an even darker
chapter. Besieged by
overwhelming charr
forces, King Adelbern,
last King of Ascalon,
destroyed his sword,
Magdaer thus unleash-
ing the Foefire, which
swept through the city
de[stroyin]g the King's
e[nemies and] cursing his
...eternal...
...m..

The rise of the dragons[edit]

Never shall a full
reckoning of the
tales of the drago-
ns be told by mere
mortals, for the
cycle of their awak-
enings date back
past the time of
Giganticus Lupic-
us into the prehis-
tory of our very wor-
ld. The current rise
of the dragons
began almost 250
years ago in the Far
Shiverpeaks. Hero-
es of the time acro-
ss ...... l ... races
...he...

Few alive today can
truly claim to have
met or even seen a
dwarf, and yet, some
250 years ago, the
Shiverpeaks fair-
ly crawled with
this determinis-
tic and highly
skilled race. Both
above and beneath
the mountains,
altered forever into
beings of rock
and stone by the
gift of The Great
Dwarf, the fe...
remain are ...
lo...