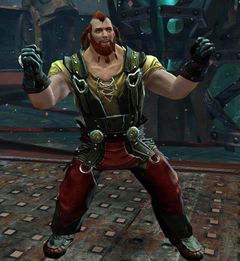 Beigarth the Smith is one of the most famous modern norn blacksmiths; his daughter, Vanhe, is also a famous blacksmith, and a member of the Vigil. Sometime in the recent past, he met Ceara, a talented sylvari whom he personally taught smithing to, hoping for her to become his successor.[1] He also won the Great Hunt a long time ago, and says it is still one of his proudest moments.[2]

Beigarth rediscovered the means to craft Deldrimor steel, sought for in the hope of forging a weapon that may break Jormag's tooth. In 1325 AE, he joined the Pact upon Trahearne's request to prove his smithing talents as the best, and made the Pact's weapons to combat the Risen army and Zhaitan. In 1328 AE, he accompanied the Pact Fleet to the Heart of Maguuma and provided his skills with other notable smiths—Izu Steelshrike and Occam—to help the Pact destroy a Blighting Tree and clear a way deeper into Mordremoth's domain.

In Hoelbrak
A smith's work is never finished...and the more I talk to you, the less I get done.

What's the word around the campfire? (Added with Living World Season 2)

Hunters are saying there's been a change in the wind. It's too warm. Too moist.

What do you think it means?

There are those who claim it's the Elder Dragons breathing down our necks. They are consulting the Spirits and signs.

Do you believe that?

Yes. I believe they're right. The Elder Dragons are changing the world with each passing moment they're awake.

You heard Scarlet is dead? (Added after "Battle for Lion's Arch—Aftermath)

I heard. And I wasn't surprised. Ceara took a wrong turn into [sic] very dark forest. I had little hope she would emerge intact. Did you have a hand in her death?

What do you know about Jormag's tooth?

I might take a swing at the tooth myself someday.

Let me know when you decide to give it a try. I'd put my money on you any day.

I will. Until then, I'll leave you to your forge.

I'll let you get back to work, then.

Before "Battle for Lion's Arch—Aftermath"

I hear you trained Scarlet Briar.

That crazy sylvari? Yeah. Her name was Ceara back then. Could keep a fire going better than most of my other forge-tenders. Quick learner. It made up for what she lacked in brawn.

Why did she leave?

From the moment she arrived, she wanted more than I could give her. She didn't like the metal. She didn't love the ring of iron on steel. She wanted answers to bigger questions.

What do you think of what she became?

I...suppose I failed her. She had so much potential, such a natural talent for ore and fire. I tried to keep her grounded, but...I couldn't do it.

During "Battle for Lion's Arch—Aftermath"

No. She's dead? How did this happen?

She and her army have destroyed Lion's Arch. It was necessary.

Some apples have worms in them. She was one of those. I appreciate that you made the journey to tell me. Thank you.

It was no trouble. Good-bye.

After "Battle for Lion's Arch—Aftermath"

You heard Scarlet is dead?

I heard. And I wasn't surprised. Ceara took a wrong turn into [sic] very dark forest. I had little hope she would emerge intact. Did you have a hand in her death?

She had to be put down. Her mind had gone rabid, and she knew only how to bite and claw. If a creature like that wanders into a populated area, there's only one choice.

What do you think happened to her?

Evil on that scale doesn't just happen. I've seen it with the Sons of Svanir. True evil.

I've seen it too.

Whoever it was did the rest of us a huge favor. She was rabid, killing and infecting others with her malice. I've seen true evil among the Sons of Svanir, those corrupted by Jormag.

You didn't see her madness when you knew her?

No, I did not. But, even with the Sons of Svanir, they start normal. The corruption is gradual, insidious. Eventually, it consumes them.