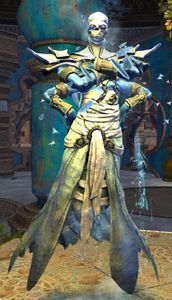 Heartless fools! You will pay in blood!

Zohaqan is a powerful water djinn, capable of commanding the elements of water, air, and earth. His power to summon powerful storms have earned him the moniker, The Stormcaller. He lives deep within the Cove of Zohaqan on Sandswept Isles.

Zohaqan's full history is unknown. In recent years he had fallen in love with a human man, Nakis, in the Crystal Desert—possibly near or from Whispering Grottos as a letter from Zohaqan to Nakis was left there.[1][2] Together the two fled to Sandswept Isles to live in peace. During their time together they had etched their silhouettes into a tree from where they watched the sunrises together. However, the Inquest captured and killed Nakis, sending Zohaqan into a blinding rage.[3]

By 1331 AE, Zohaqan had come to despise all mortals alike, believing them all to be treacherous beings. The djinn constantly built storms around the isles to kill all inhabitants.[4] Olmakhan elders Rhona and Yowen led an expedition to Zohaqan's cove where they confronted the djinn with intentions to stop him and find out what had invoked his rage. Zohaqan was not willing to stop what he had begun, however, and he viewed the elders' demands as disrespectful. The enraged djinn attacked the elders' party but was defeated after a long clash. Although Rhona was hopeful that the djinn was gone for good, Yowen was less certain as she believed Zohaqan would be powerful enough to return to spread his rage throughout the isles. Adventurers would eventually learn the reason for the djinn's rampage but Zohaqan would refuse to listen to reason and stubbornly continued his campaign every time he returned to his cove.