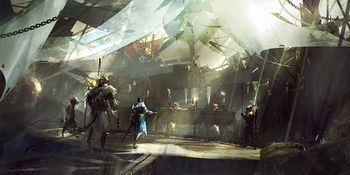 Where once a legionnaire would give orders, the eldest and most experienced came to offer their advice together. Our council was born on the long five-year trek to our new home, our rule of law and governance. For as long as we have borne the name "Olmakhan" have we been led by a council of five.

The Council of Five is the governing body of the Olmakhan tribe. It consists of five experienced charr elders from the tribe who are elected for the position.[1] The council holds meetings within the wreckage of the crashed airship known as the Iron Whale which has been repurposed into a council hall at Atholma.

After a charr warband began a five year trek south to flee the tyranny of the Flame Legion and grew in numbers as other charr refugees joined their ranks, the hardships they faced together bonded their group into a close-knit community which began viewing itself as a big tribe. The rigid military hierarchy gave way for the eldest and most experienced to come to offer their advice together so the tribe would survive during the dangerous trek. Eventually five of these elders were elected to lead the tribe and became known as the Council of Five. The council led the tribe to the Sandswept Isles and established the Olmakhan community, named after the first sandshifter Olma, as they built the village of Atholma and began learning to commune with nature and magic.

The Council of Five led the Olmakhan through many hardships, including the Rising of Orr which caused a tidal wave that killed many members of the tribe, the arrival of the Inquest who began capturing charr for their experiments, as well as the crashing of an airship which the Olmakhan named the Iron Whale on the beach near the village. The remains of the airship were converted into a council hall where the elders have held meetings since.[2] 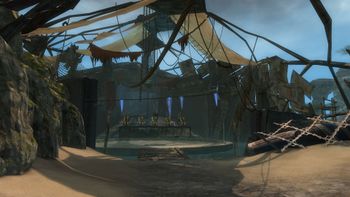 The Iron Whale, the council's seat of power.

After several members of the tribe had been captured for experimentation in 1331 AE, the Council of Five convened to discuss how to handle the threat the Inquest were posing to their community. They were surprised by the safe return of one of the captured Olmakhan, Boticca, who brought with her an outsider introduced as the Pact Commander. Boticca argued for the tribe to take a stand against the asuran invaders and drive them out but met resistance from the elders who advocated for many alternatives such as trying to learn the intruders' motives, fleeing to safer grounds, and not using violence except as a last resort in order to protect the young and the old from harm.

The meeting was interrupted by Efi, one of the cubs who learned that her parents had died in Inquest experimentation despite the elders trying to shield her from the truth at first. Annoyed at being treated as a child, Efi stormed off to gather her fellow cubs to plan a retaliatory strike on the Inquest. While Boticca stayed at the council chambers to convince the elders to take action, the Pact Commander was asked to keep an eye on the cubs.

Atholma was soon raided by a great number of Inquest golems. When the Mark II Beta Exterminator Golem appeared, Elder Narn used his magic to shield the others from harm only to be eliminated by the golem in response. The rest of the elders, Boticca and the Pact Commander fought against the exterminator golem with the elders casting restorative magic on the Commander. After the golems had been felled, the surviving members of the tribe and the council gathered around Narn's body to mourn him and to return him to the land.[3]

Realizing that fighting back was the only way to save their people, the rest of the council sided with Boticca and the Commander to take the fight to the Inquest. They provided assistance via Olmakhan scouts who helped secure Inquest installations, which the Commander had disabled, and stormcallers who helped the Commander and Boticca breach the defenses of the Inquest's main base of Rata Primus in a daring assault. After Rata Primus had been severely damaged in the raid, the Olmakhan made preparations to elect a new member for the Council of Five to replace the late Narn.[1]

When a mysterious storm began raging around the isles and threatened the villagers after the raid on Rata Primus, Elders Rhona and Yowen led a scouting party to the Cove of Zohaqan to find the source of the storms, the rogue djinn Zohaqan, and put an end to his rampage. Although they were successful in defeating Zohaqan, they could not truly kill the djinn who kept returning to cause more mayhem in his grief.