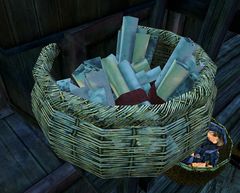 Southward Progress is a scroll found in Lorekeeper Rhosan's dwelling in Atholma. It describes the flight of the Olmakhan from charr homelands to Sandswept Isles.

The rise of Kalla Scorchrazor gave hope to the oppressed legions of the charr, but simply hearing words of promise on the wind did little to end their suffering. The Flame Legion was notorious for snuffing out insurgents to their rule, and our forebears feared this would be Kalla's ultimate fate as well.

While we would later come to learn of her victory on the Plains of Golghein, the first of those who would become the Olmakhan took Kalla's words to heart and chose to rebel in their own way: to flee the charr society that oppressed them so cruelly.

The Olmakhan, then a mere warband like any other, left our ancestral homeland. Flame Legion loyalists and humans both sought to destroy us, with no quarter given by either side.

Finally unbound by the Flame Legion's harsh dictums, the warband that would one day be Olmakhan brought together our charr brothers and sisters. They were free to use their magic, to teach and learn without fear. It was this magic that helped deter our pursuers, which allowed us passage out of Ascalon.

This was no simple flight, of course. Our warband had many to its name, young and old alike. It was slow going for many years, picking our way through a landscape most treacherous. As we went from the frigid peaks of the Shiverpeaks to the searing sands of the Crystal Desert, our warband was forged into something new. Something we hadn't expected. No longer were we a band of warriors. We were more than that; a tribe of our own.

Where once a legionnaire would give orders, the eldest and most experienced came to offer their advice together. Our council was born on the long five-year trek to our new home, our rule of law and governance. For as long as we have borne the name "Olmakhan" have we been led by a council of five.

We traveled south until we reached the sea, its surface a glittering mirror reflecting the calm skies above. It was a sign, we knew, that our long journey had finally reached its end. The Olmakhan would live in this place, one with the world around it. Not seeking to dominate nor seeking to control.

Nature favor us and our great undertaking.