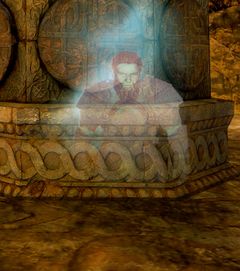 Seen all kinds wander in and out through the years. Dredge. Thieves. Tourists. Pah. You, though–you're okay.

Frodak Steelstar is a dwarven ghost. In life, he was a member of the Brotherhood of the Dragon, a dwarven group dedicated to the dragon Glint. As a weaponsmith, he aided Glint with forging the original Dragonsblood Spear. Since his death, he can be found watching over the ruins containing his tomb in Thunderhead Peaks and asking adventures to kill gravelings which have been disturbing the catacombs.

In the past, Consular Frodak Steelstar was a dwarven weaponsmith and member of the Brotherhood of the Dragon who aided the human Chosen in search of Glint's guidance at Droknar's Forge. After an increasing number of dwarves underwent the Rite of the Great Dwarf in 1078 AE, he helped Glint forge the Dragonsblood Spear in the Forge which the remaining members of the Brotherhood, Exalted and Zephyrites had built beneath Thunderhead Keep in preparation for Glint's legacy. Unlike most dwarves at the time, Frodak died before undergoing the Rite to turn into a stone dwarf.

Since his demise, Frodak began haunting the tomb reserved for him and another famous weaponsmith, Marhan the Mighty, as a ghost.[1] As centuries passed, he witnessed various dredge, tomb raiders and explorers passing through the catacombs.[2]

In 1332 AE, Frodak came across the Pact Commander, who was trying to access the consul's tomb to find a mold to forge more Dragonsblood Spears, and reprimanded the Commander for destroying the original Dragonsblood Spear while revealing that he had learned about the deed from other gossiping ghosts in the Mists. He told the Commander that the needed mold was in his tomb but it could not be retrieved until the graveling rampaging through the tomb had been defeated.

After the Commander had successfully killed the graveling, Frodak reminded them not to break the mold. He revealed how to use various plates scattered throughout the catacombs to enter locked rooms and provided the Light of Deldrimor for any curious adventurer to reveal hidden treasure in exchange for reassembled dwarven keys. Frodak also appeared to explorers braving Brechnar's Gauntlet at various points and tried to persuade them to stay around to clear out gravelings in exchange for a promise of riches.[2]

What do you want?

I have this reassembled plate...

(when ghostly mischief has quieted)
I'll trade ya. This blessing's called the Light of Deldrimor. It'll help you track down certain chests you might find...interesting.

There's a catch, though—the ghosts here are real tricky. Once a day, they scramble everything. You might want to finish exploring before that happens.

No problem. I've got this.

I'm actually too busy for that right now.

(if account has already traded a plate in before daily reset)
Didn't I already give you a plate? Gotta pace yourself, fellow. Talk to me again tomorrow.

Thank you.
(when ghostly mischief is active)
Won't do you any good while these ghosts are actin' up. Come back when they've settled down.

I have some questions.

What is this place?

A fine example of dwarven craftsmanship, for one thing. Seen better days, of course. But then, who hasn't? It's also a place some of us got laid to rest.

Thanks for the information.

How do I explore?

Get your hands on a key plate to get into the rooms. Might take some doin', though. Some of the other ghosts around here are real jerks-keep moving the plates around.

Some areas, like Brechnar's Gauntlet, aren't in the best condition. It'll take some work to see everything.

Good to know. Thanks.

Hmph. Had my moments as a weaponsmith back when Glint was around. These days I mostly fantasize about gravelings dying painful deaths. Don't ask.

Thanks. I'll see you around.