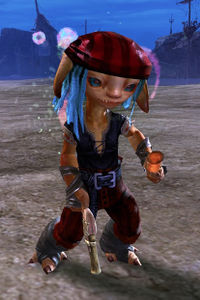 Sotzz the Scallywag is a target of the Guild Bounty. Wanted for theft, public intoxication, and lewdness. Target is known to "spirit" himself around the region north of Lion's Arch in stolen barrels of ale.

Sotzz can be found hiding in one of the several hundred Suspicious Barrels scattered across Gendarran Fields. If he's been selected as a bounty, your guild can begin destroying barrels until you locate him. After most of the barrels have been opened, he'll leave his hiding place and can be found much more easily. However, if he remains out in the open for over a minute; he will disappear, all of the barrels will reset, and your guild must restart the search.[1] Once he's been located, an authorized guild member can speak with him to begin the encounter.

Out of the way, mate. Can't you see I've got a spot of drinking to finish?

You've had enough. We're here to drag you to the authorities. (with bounty active)

A decoy? Or his hiding place?