Dynamic event
Part of
Into the Oasis
Level
80 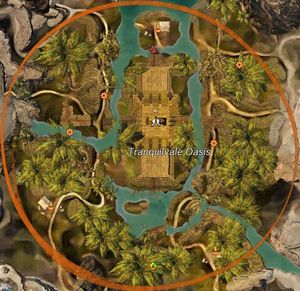 This event takes place at 3 rotating locations, in blue borderlands oasis followed by green borderlands oasis, red borderlands oasis then repeating. The time of the next event is determined by the end of the last event (that makes creating a static schedule table impractical). There is a 15-minute countdown [verification requested] immediately followed by a 15-minute warm-up, Events are beginning to stir within the oasis, which precedes the event. If no team has completed the event within 60 minutes then it fails. If a team succeeds then following a short warm-up, the Skysplitter begins automatically attacking walled enemy objectives, making them easier to capture.

Power cores are harvested from creatures marked by orange cogs (

) on the map in the oasis. Once the creature is killed, one player picks up the power core and carries it to one of the 3 collectors, marked by an orange basket with a down arrow (

) on the map. The other members of the team may guard the carrier or try to obtain more power cores. Enemy teams may attack the carrier to prevent delivery of the power core to the collector.

The Skysplitter is destroying the enemy's gates.

The Skysplitter is destroying our gates.

Priory Researcher: Mmm. It's over already? We'll definitely have to schedule another experiment.