Here's a great overview of the different guild missions and their rewards: http://www.guildwars2hub.com/guides/basics/complete-guide-guild-missions

Unfortunately I do not have the time to convert this to a proper article.

Is there anyone who can confirm that you recieve a Mission-Chest as reward for each indivitual guild mission? Or do you simply get one Chest a week?--Snakes Shadow 22:15, 18 March 2013 (UTC)

Players can receive a guild reward chest for each mission type (Bounty, Rush, Challenge, Puzzle) once per week. The reward chests are per account. As a result, the maximum number of reward chests you can obtain is 4 per week for an account. --Kalendraf 15:51, 11 September 2013 (CDT)

Trying not to make it too big, but basically formed it based on other navs. The top one that includes everything (except Treks) has all the info I'd want, but may be too big. The bottom is definitely functional, but doesn't allow easy navigation. Looking for critique/advice: http://wiki.guildwars2.com/wiki/User:Vahkris/Sandbox Vahkris 14:25, 30 April 2013 (UTC)

I condensed version 1 by linking the row headers and removing the centered links at top. I also forced the headers to no-wrap. I think that version is fine. —Dr Ishmael

Would be nice to know rewards for Participation without Representing the guild. Even is its just gold/karma. Smoke (talk) 12:59, 14 July 2013 (UTC)

While I agree there was a degree of redundancy, I was attempting to rectify a glaring omission. This page is currently written from the perspective of Guild Leadership. There is nothing oriented to the perspective of a player, particularly a new player, who may be unfamiliar with game mechanics. Consolidation of the needed information in a single location may be quite helpful for such a player. A discussion prior to deletion would have been appreciated. ~ 1Maven (talk) 18:27, 24 February 2015 (UTC)

The individual mission types (Guild Rush, Guild Challenge, etc.) already have their own lists. There's no need for an "overview" at this level. —Dr Ishmael

The only missions that give Influence are Trek and Bounty Training. On the Trek Discussion-page there are several people stating that the Influence cap is 700. When done a T1 Trek and T2 trek, only the differance is paid out. I would suggest to edit the main page to stat that Trek has a max cap of 700 per week, while bounty training has no cap. ( sorry, cant log in atm. San Saga) —The preceding unsigned comment was added by 77.165.30.16 (talk • contribs).

Being that the missions have taken a new format, some changes will probably be in order here.

The missions also seem to reset at the new reset time. Not sure about the consistency or rotations either. I will try to put some basic information later tonight when possible.Syunfung (talk) 22:38, 26 October 2015 (UTC) 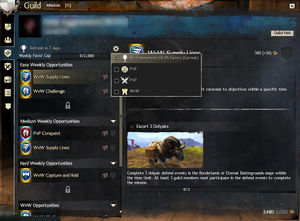 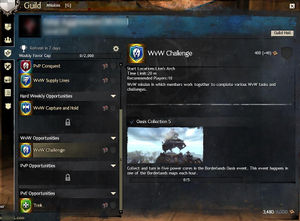 IMHO this section requires a rewrite because it does not yet account for the fact that the list of missions changes entirely depending on what preference a guild has selected for the week. There are 4 choices: None, PvE, PvP and WvW. Only PvE is shown. Thumnails show an example of None. In addition, there is additionally considerable information that should be added to the article. Mora seems to disagree with adding any additional information for reasons not yet made clear. In any case, I've placed an example at User:1Maven/sandbox7 for people to review. What do you think? ~ 1Maven (talk) 20:44, 16 November 2015 (UTC)

Would it be beneficial to create an infobox template for Guild Missions as was done for Guild Upgrades? HoT expanded the number of Guild Missions. There are now 14 main types and some, like puzzle, have sub-cases. There is a common format displayed in the Guild missions panel which would led itself to a template. ~ 1Maven (talk) 21:35, 25 November 2015 (UTC)

(moved since newer topics are normally placed at the bottom, not the top)

I just wanted to put some information regarding the number of resonating slivers you get for each mission. From the WvW opportunity WvW Capture (difficulty corresponding to the "hard" weekly WvW capture), I got 10 slivers. From the PvE Opportunity, Bounty (also corresponding to the "hard" level), I got 1 sliver. From the PvP Win Easy Weekly, I also got 1 sliver. I'm not sure how to best present this information so I'm just going to leave it here.Zomperzon (talk) 02:28, 30 November 2015 (UTC)

Have you received the same number of slivers multiple times during the same type of mission or does the number vary within a range? ~ 1Maven (talk) 06:24, 30 November 2015 (UTC)

I have 4 guilds, each of which is set to PvE mission preference. When the new GM system first started, I received a different set of missions in each guild. However, for the past 3 weeks or so, I receive the exact same missions in each of those guilds. Not just the same type of missions, but if there is a fixed target, it will also be the same target across all guilds. I'm not sure if this is intentional or not. 76.253.2.43 17:38, 5 December 2015 (UTC)

I believe it is intentional that all guilds with the same preference receive exactly the same missions for the week. If that was not what you saw earlier then it may have been one of the many guild mission bugs that are gradually being fixed. ~ 1Maven (talk) 19:12, 5 December 2015 (UTC)

Looking for an old guild mission[edit]

I'm looking for a Guild Mission (could be Challenge or Puzzle) that I did in early 2013. It took place entirely underwater. It could be in Bloodtide Coast, but I'm not sure. The mission involved trying to break into some underwater facility and it involved some puzzle solving I think. Have any Guild Missions been removed from the game? --115.134.2.52 23:48, 10 January 2016 (UTC)

Portmatt's Lab seems probable, the only other underwater base I can think of with a decent chain of events is Bauxite Alchemicals. -Chieftain Alex

There is the line " A rewards chest may only be received by a few participants following successful completion of certain missions. For other guild missions, you may need to wait until the mission timer expires before receiving a reward chest."

I am aware this bug was around when HoT launched but I think this was resolved. Has anyone still seen this bug flying around or can it be removed from the wiki? -Darqam (talk) 17:43, 15 January 2016 (UTC)

What is the chance of getting each type of PvE Guild Mission?[edit]

For the 2 instanced PvE mission types, how do both personal rewards and favor work?[edit]

Let's say I'm representing Guild [AB] and activate the mission in [AB]'s Guild Missions interface.
But instead, I enter Guild [CD]'s mission instance and successfully complete the mission (event) inside.
Also, no one else inside the instance was representing [CD] at the time of the mission/event's completion. (this is just an example; the person from [CD] un-repped [CD] after activating the mission (both in the G panel and the game world) and entering the instance).

Does the +10% Favor from "No Preference" allow a guild to exceed the 2000 favor weekly cap?[edit]

Old comment but info to future readers. No, the 10% bonus does not allow a bypass for the 2,000 cap. It merely adds additional favor rewards to be spent on upgrades. The cap is still set to 2,000; however, occasionally during the week, sometimes the favor cap resets early allowing guilds to attain more favor from unfinished missions later on in the cycle. This would be considered a bug and may be fixed in the future. -- Magic