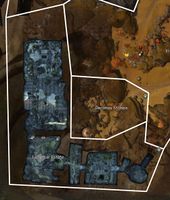 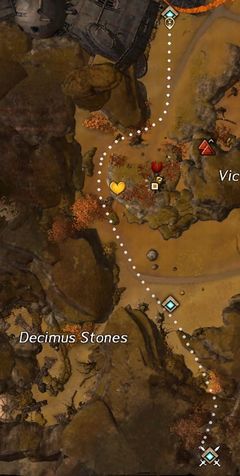 Langmar Estate is a Guild Puzzle located in Plains of Ashford. Guild members must coordinate to get through the haunted ruins within the time limit, overcoming obstacles and puzzles to reach the end. Players have 20 minutes to complete the puzzle. A guild needs a minimum of six players to complete the mission, although it will be significantly harder without more. It is a good idea to bring a Mesmer or two who are confident with small jumping puzzles along to a Puzzle so they can portal up any guild members who may fall during jumping sections, or who may accidentally get left behind in a previous room.

Langmar Estate Waypoint — is closest, but will be contested until the puzzle has begun. In that case, use

Vir's Gate Waypoint — when porting from outside the Plains of Ashford (see map).

Section-stub. This key section of the article is incomplete. You can help the Guild Wars 2 Wiki by expanding it.
Reason: Verify all foes are here for stub removal

Without puzzle assigned
A guild officer needs to activate this mission for you before you can take part in this puzzle.

With puzzle assigned
You'll need a party of your guild members to take on this puzzle. Are you ready?

What's the objective of this puzzle?

There's a rumor that these decaying ruins contain treasure, but there are also tales of lethal booby traps within the estate. Puzzle a way through, and you just might walk away rich!

There are three sections of the puzzle: Courtyard, Gallery, and Armory. Each section requires multiple players to complete the challenges within. Note that the gates close after each section preventing swapping characters mid-run.

Players enter through the main door and proceed down the hallways of the ruins until they reach the Courtyard, a large room with two sets of 3 Charr statues and 3 human statues facing each other (one set each to north and south). In the center of the room is a platform with a book. Reading this book gives a riddle with the clue on what needs to be done. The last page has an option to begin the event if it has not been started yet. Ghostly weapons will spawn in the hands of the human statues. Guild members must search the weapon racks against the walls (3 per corner) until they find weapons for the Charr statues. Each weapon has to go on the Charr statue opposite the human statue that has the weapon it beats so that the Charr will win (according to the riddle above, see image for linked statues):

The ghostly weapons act as bundles and do not have weapon skills, and dropping them destroys the weapon. The weapon racks take 4 seconds to search and can be searched again in a few seconds. Searching the racks can also summon Ascalonian ghosts to attack. These are relatively simple to dispatch, being the appropriate level for the zone, and are more minor annoyances than anything else. If a ghost appears from a rack, you will not receive a weapon, and should move to a different rack. Out of the twelve total racks, only three racks will give players a weapon (one sword, one staff and one bow).

This step is made somewhat easier as you cannot put the wrong weapon on the statue. Once completed, you are notified the exit door is now open and can leave.

Immediately following this room is a gate that requires four guild members to stand on four buttons on top of the pillars at the same time. Minor jumping is required for this step, and all other guild members can wait below. The gate will open when all four are pressed at once, and the guild can move on to the next section. The gate is timed once open, any guild members who do not make through within the timer, will be locked out. Therefore 3 or less guild members locked out have no way to go through. 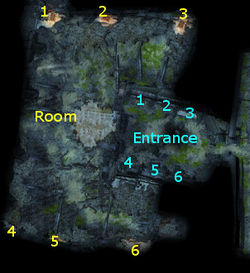 Once completed correctly, the gate in the northwest corner of the room will open. Proceed along the pathway until you reach next room.

The Armory is a three-level room, with the middle and bottom floors filled with a yellow gas. Guild members enter on the top floor where there are two buttons to the north and south of a hole in the center. The goal is to reach the bottom floor and build a battering ram to exit the armory. The yellow gas is highly lethal and will deal a significant amount of damage each second, so the guild will need to assign members to stay on the top and middle floors to keep the gas at bay while they work on the bottom floor.

To start the event, two guild members will need to stand on the two buttons, causing water to pour into the lower level, clearing the gas. These two players will need to remain on the buttons to keep the gas clear for now. All other guild members can drop down to the second level. The ghosts on this top floor have knockback attacks, so try to keep them clear (assign bodyguards to remain up top if you have the numbers). Moving from the button for a couple seconds will not immediately kill everyone else, but is highly discouraged.

The middle floor has machinery, with exposed gears, and several oozes that repeatedly spawn. Guild members need to kill the oozes to get a Ball of Ooze, which should be used on the gears to grease them and keep them running. Leave a couple guild members to continue killing oozes and greasing the gears while the rest jump down to the lower floor. Without the gears repeatedly greased, they will seize up again and the gas will return to the area.

The bottom floor has various carts strewn about. Kill the nearby ghosts and search the carts to find parts. Take them to the fallen column in front of the door on the north side of the room to begin building a Makeshift Ram. Once built, at least one player needs to keep using it to break down the door. After the door is broken, the gas dissipates permanently and all guild members can move to the bottom floor and through the door into the vault to accept credit and receive rewards via a bouncy chest above the mini-map.

To exit, players can make their way through the winding path to the top of the vault and find the well in the center. Drop into this and kill the Veteran Shadow Skelk in the water below and interact with the statue of the Ascalonian Soldier to leave. Players can also waypoint directly out of the instance or use the "Leave Instance" icon above their mini-map.